Bugarregarre (the Dreamtime) – a sacred time when the spirit beings created all life and ‘The Law’ and encoded it in the Song Cycle.

See a Map of the Lurujarri Trail

Day 2 on the Lurujarri Trail begins at sunrise and is one of our longest days. Today we are hiking along coastal dunes until we reach Wirrkinymirri (Willie Creek) where a small boat will ferry us across crocodile infested waters. From there we’ll be walking the rest of the afternoon until we make camp in Nuwirrir (Barred Creek). This year, the Law Bosses are passing down the responsibility of trail to the next generation so I’m spending a lot of time with Terry Hunter Jr. It’s his first time leading the Lurujarri Trail and he admits he’s a little nervous. As we walk the Goolarabooloo song line, he is entrusted by his people to know and share their ancestral songs, stories and legends that originated in Bugarregarre, their mythical time of creation. 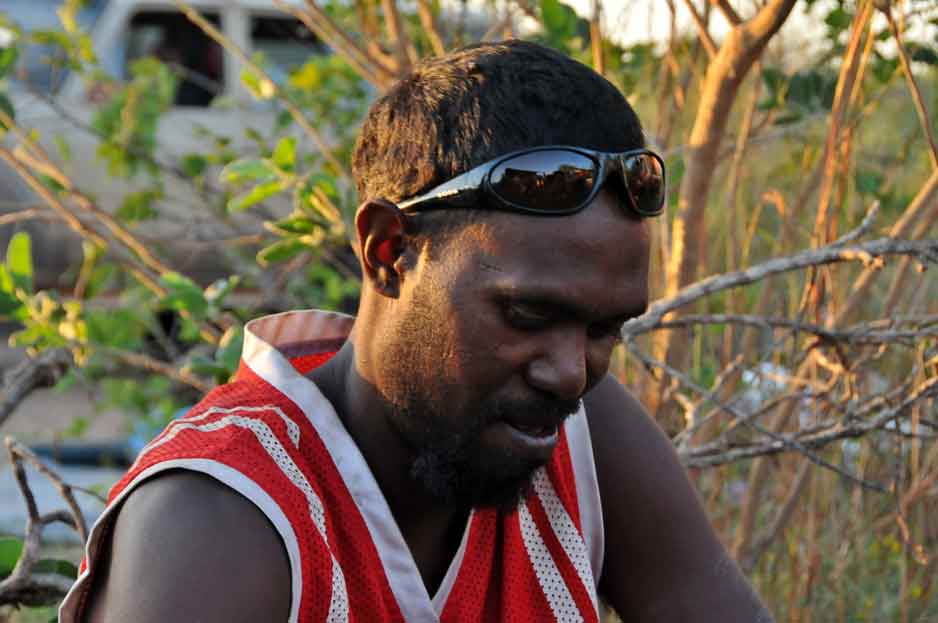 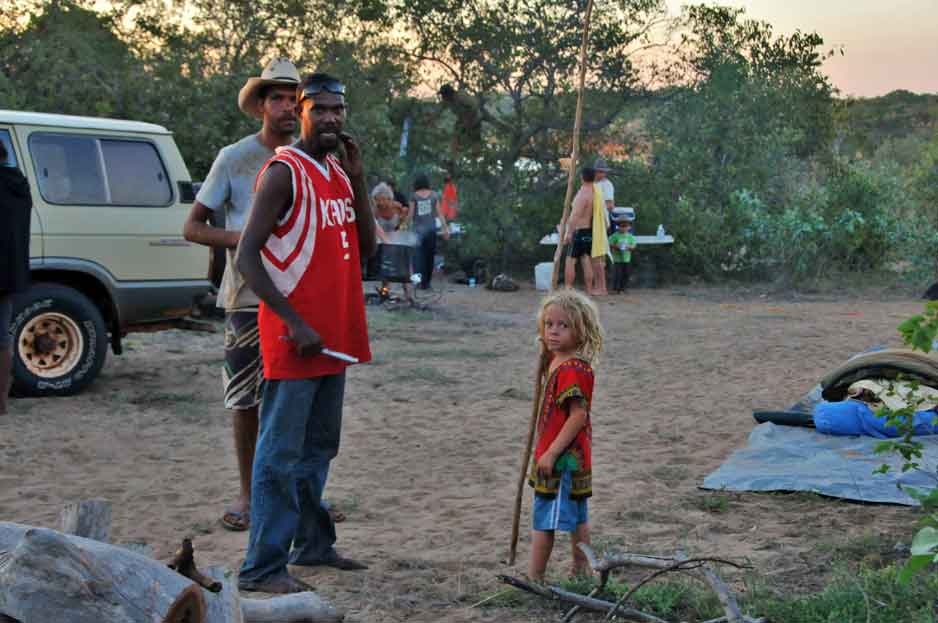 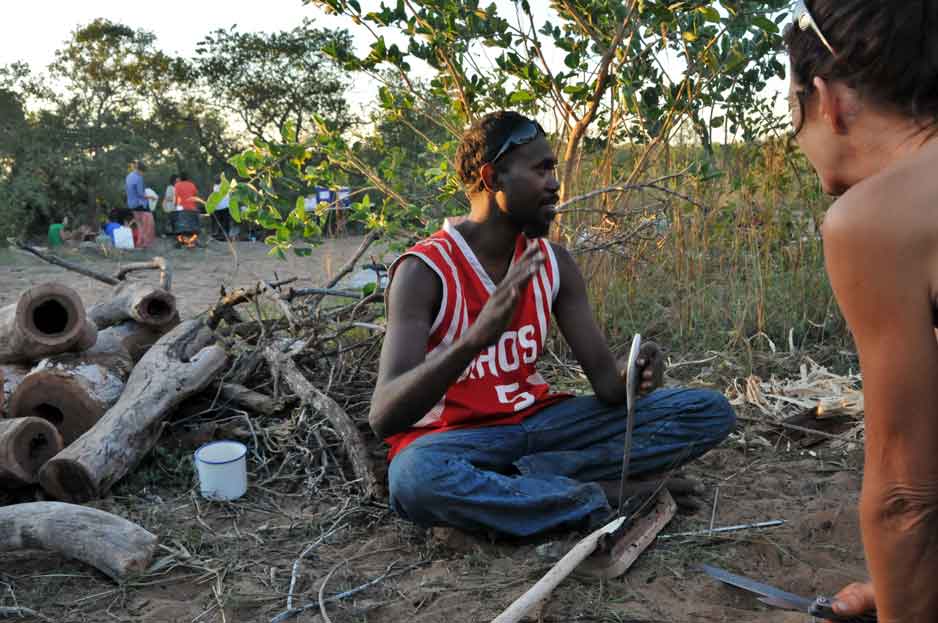 The Nadja people gave us songs; the first sounds (for) how to travel through country. We call that traveling through country a song cycle or song line. It has been created so we can sing our way through our country.– Terry Hunter Jr., Trail Guide, Goolarabooloo Traditional Owner

The first song of this place was just a clap, a plain old clap. The Nadja people, in their dream, saw their Jela – Jela is a waterhole – their Jela was now a rock. The smell of death was in the air. Two powerful men from the Nadja, their most spiritual, decided to break this rock and the water from the rock took them. They become alive but they didn’t become humans, they become small trees, dingo maramara (trees). Basically, the moral of that story is no water, no life. – Terry Hunter Jr., Trail Guide, Goolarabooloo Traditional Owner

Simon on his second day explores deeper the Coolarabooloo's culture. 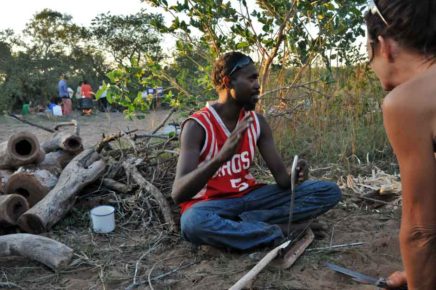 My visit to the Kimberly came at a sensitive time for the Goolarabooloo community. Recently, they made the decision to turn down a multi-million dollar compensation package offered by Woodside, the corporation seeking to develop a natural gas port at Walmadan (James Price Point). The money was intended to offset the use of their land. As one of the Goolarabooloo Law Bosses, Philip Roe is an official representative of his people. While we walked the Lurujarri Trail, I had the opportunity to ask him why the Goolarabooloo declined the financial compensation, one that most of Aboriginal community’s in the Kimberly chose to accept.

If you break a song line, you might as well just get a rifle and shoot yourself because it’s taking your culture, your heritage, and everything away from you.– Philip Roe, Goolarabooloo Law Boss 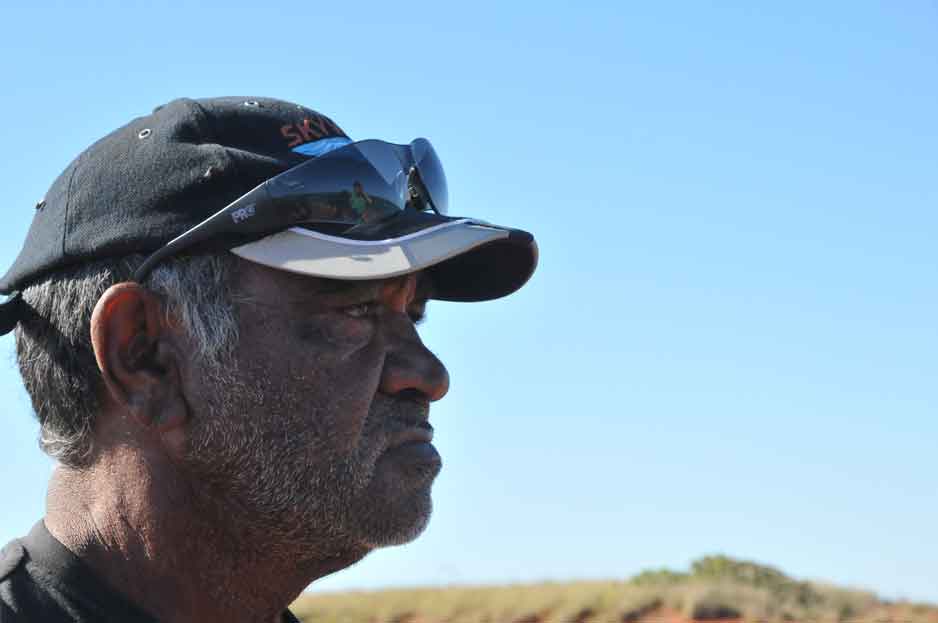 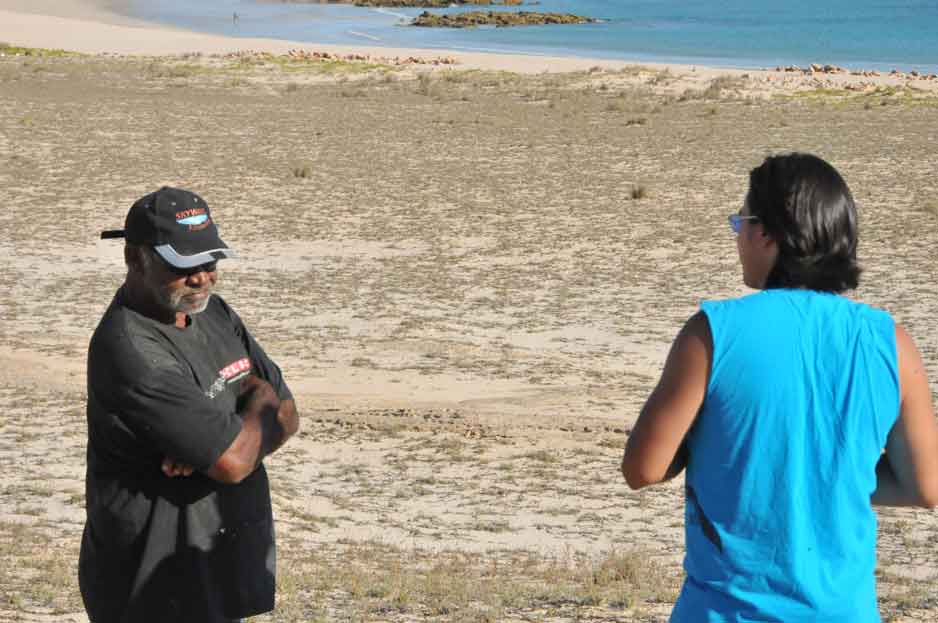 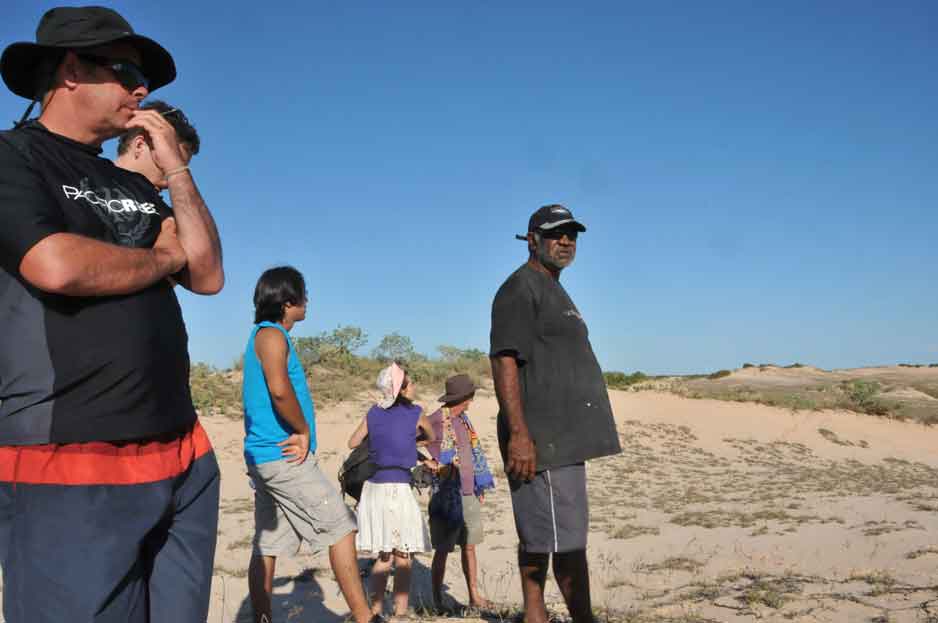 Philip and Simon walk along the Lurujarri Trail and discuss why the Goolarabooloo declined the financial compensation from the government.

Like all the generations before them, the Goolarabooloo rely on the song cycle to sustain their deep connection to country, the preservation of their people and culture.

We are now well on our way along the Lurujarri Trail and I’m growing accustomed to the peace and serenity you feel when you follow in the footsteps of some of the oldest people on the planet. Each day, we walk along coastal dunes and large stretches of pristine, uninhabited beaches that separate the Kimberly from the Timor Sea. As the Goolarabooloo guide us along their song line they share their history, culture and knowledge of this amazing environment. Despite the distance and terrain we are covering, the experience makes our days feel short and rewarding, as we end each day cooling ourselves in the ocean before enjoying a hearty meal.

The Goolarabooloo family counts among them several non-aboriginal friends who lend their skills and expertise to preserving and defending their country.

Soon we’ll arrive at the sacred place the Goolarabooloo call Walmadan, the proposed site of the natural gas plant at James Price Point. Although the stories, culture and scenery we are experiencing is incredibly rewarding, hiking in loose sand for hours finds us all arriving in camp with healthy appetites. As we walk the Lurujarri Trail, the Goolarabooloo family are busy setting up our next campsite, fishing, hunting and gathering traditional foods to compliment our next meal. 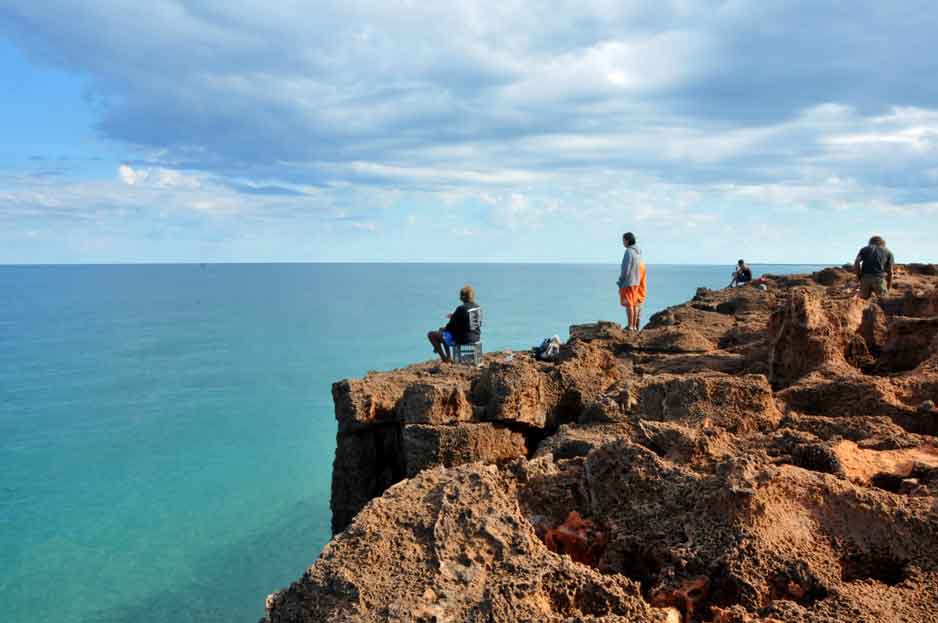 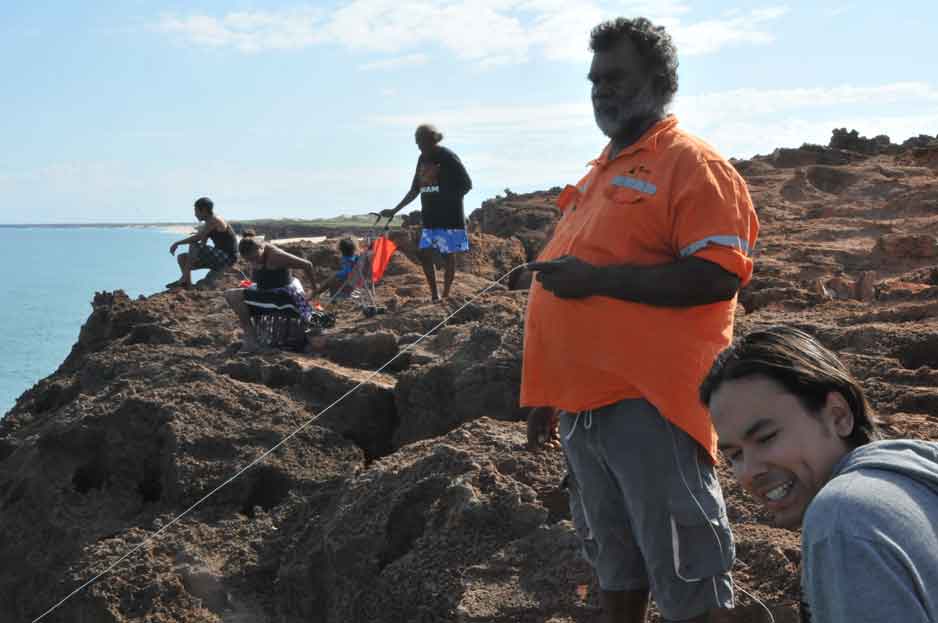 Day 5 and we are gradually progressing toward Yellow River and the end of the Lurujarri Trail so the Goolarabooloo are encouraging me to see and experience all that their culture and traditions have to offer. Law Boss Philip Roe and other Elders in the community have taken me under their wing, allowing me to walk with them and learn about their vast knowledge of this land and sea. As we make camp in Walmadan late in the afternoon, Philip invites me to join him and a group of Goolarabooloo hunters as they set out to sea to catch our dinner. 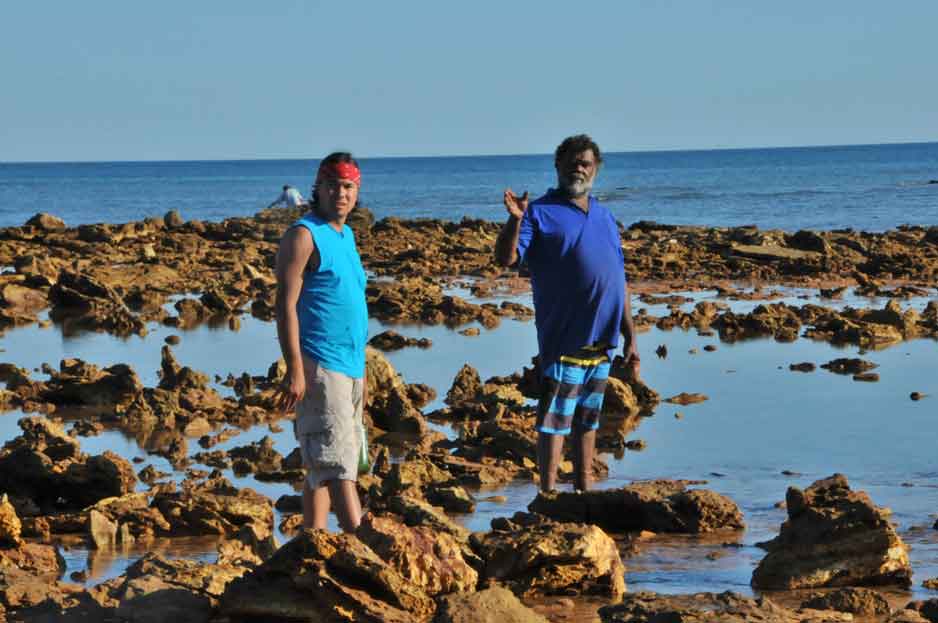 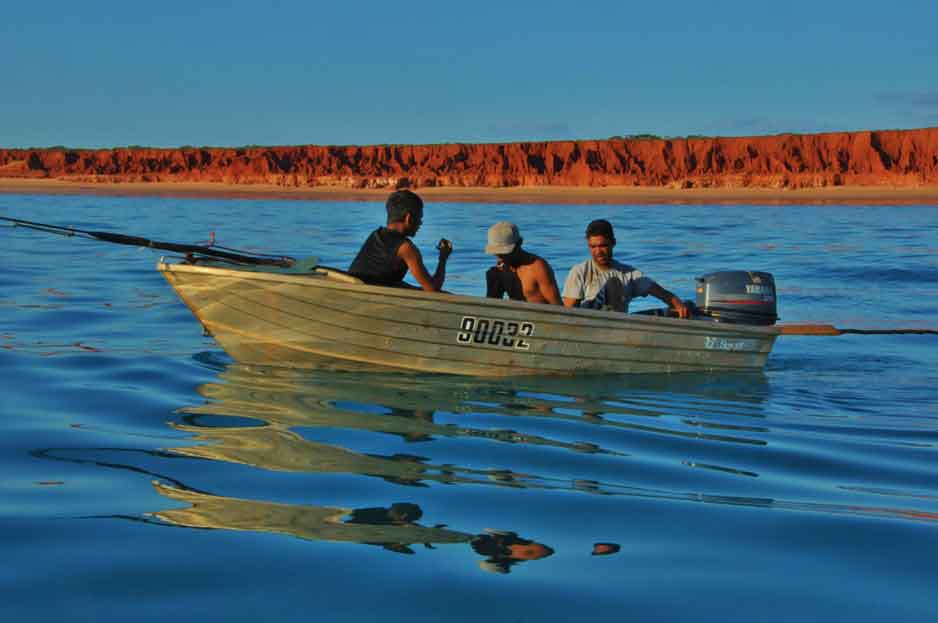 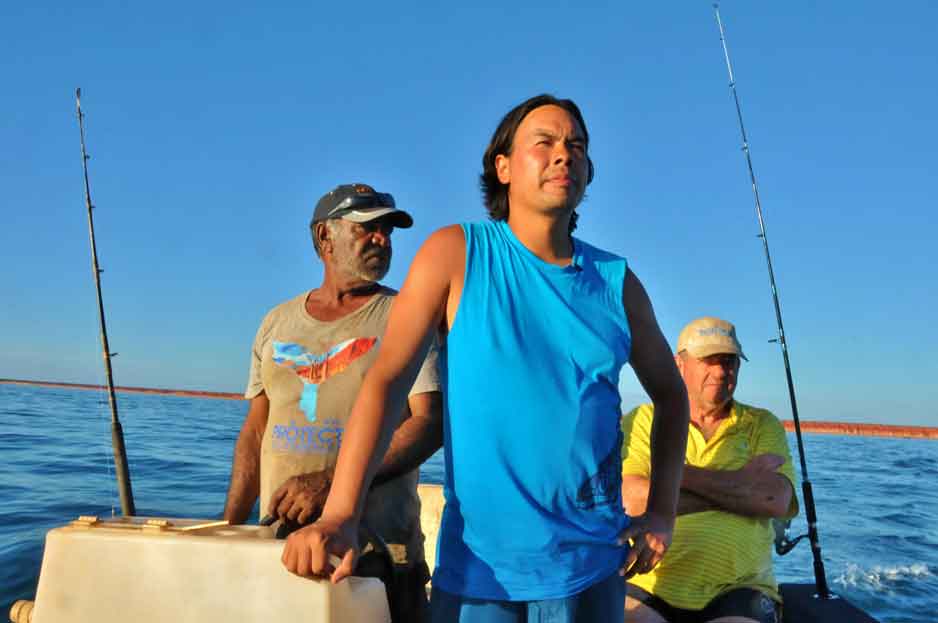 Simon joins Philip and a group of Goolarabooloo hunters to catch dinner.

As we approach the end of the Lurujarri Trail there’s only one more day of walking from here to reach Yellow River, our final destination. Today however, we are spending our day at the place the Goolarabooloo call Walmadan, commonly known in Australia as James Price Point. It was here that Woodside, Australia’s leading liquid natural gas producer, proposed to develop a massive natural gas plant. In the face of staunch indigenous and environmental opposition this mega-project was eventually scrapped however it remains ground zero in the push to industrialize the Kimberly.

As the days on-trail blend in to each other, and we move deeper into the past, it’s hard to imagine how a massive industrial complex could ever fit here. 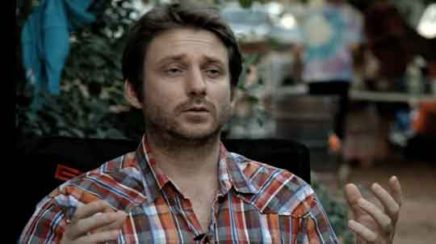 See why Martin wants to protect the Kimberly

This morning Goolarabooloo Law Boss Philip Roe is walking me around Walmadan and introducing me to some important friends of the community who are working to support their conservations efforts. The fight over the gas hub proposed for James Price Point elevated into a national issue within Australia, garnering huge media attention and sparking the debate over industrialization of the Kimberly. Now, prominent environmental and conservation groups both in and outside the region are helping the Goolarabooloo to defend their song lines.

What civil society has done is stood up and said ‘No’, this is a place that needs to be protected, and we’re going to do whatever it takes to do that in a peaceful and non-violent way.– Martin Pritchard, Director, Environs Kimberly

Philip also wants to show me a unique scientific project the Goolarabooloo are involved in. The waters off Walmadan are home to one of the world’s largest hump back whale breeding grounds and this time of year is the peak of their migration along the Kimberly coast. The Goolarabooloo are supporting a community based science project that’s working to quantify the size of this whale population. 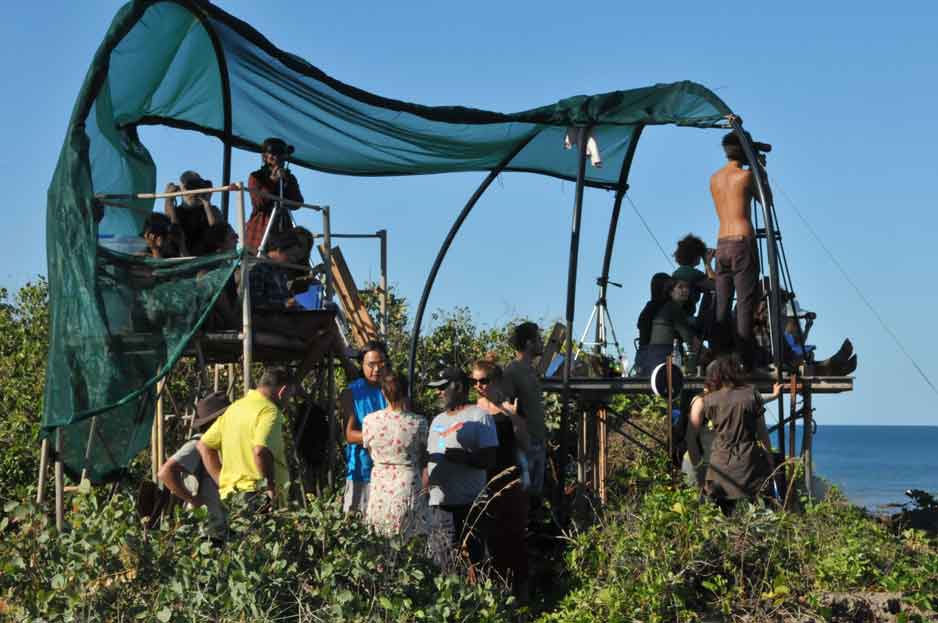 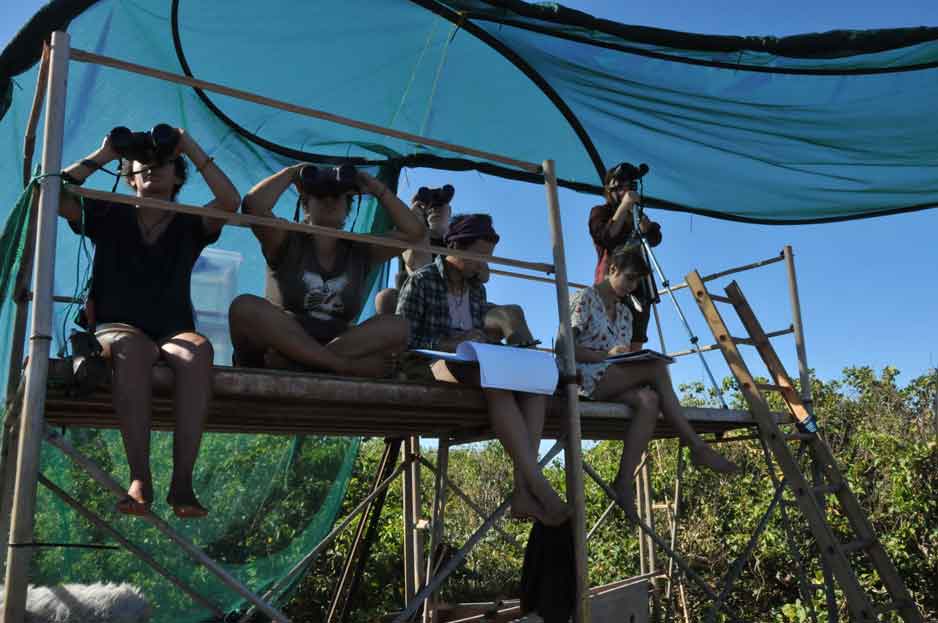 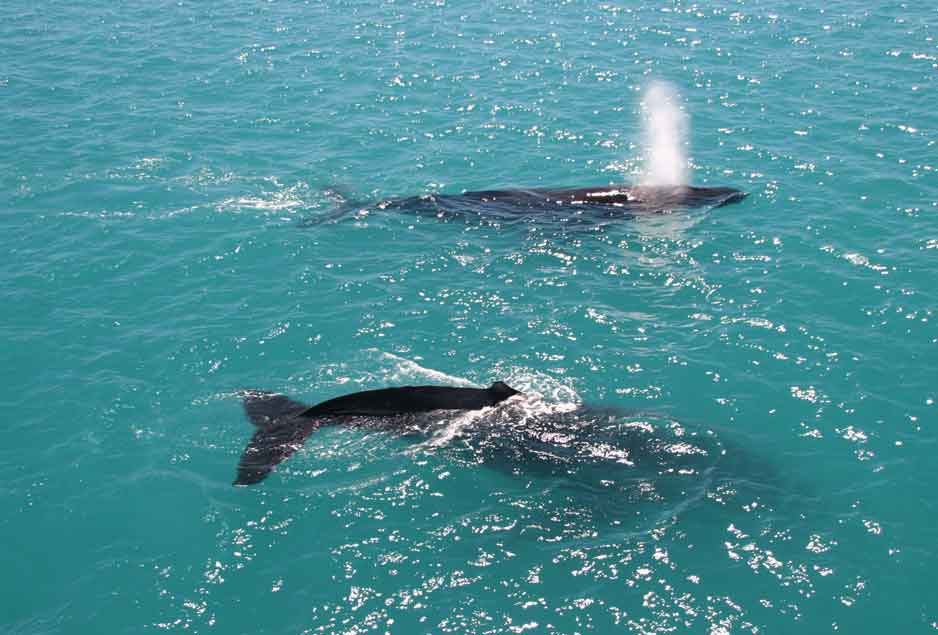 Simon and the group are heading to Walmadan, a home to one of the world’s largest hump back whale breeding grounds.

After a week walking we have finally heading to Yellow River and the end of the Lurujarri Trail. Today, the Goolarabooloo are leading us on a walk up the river to collect bush honey before we set our sites on packing up our tents and beginning the long journey home. 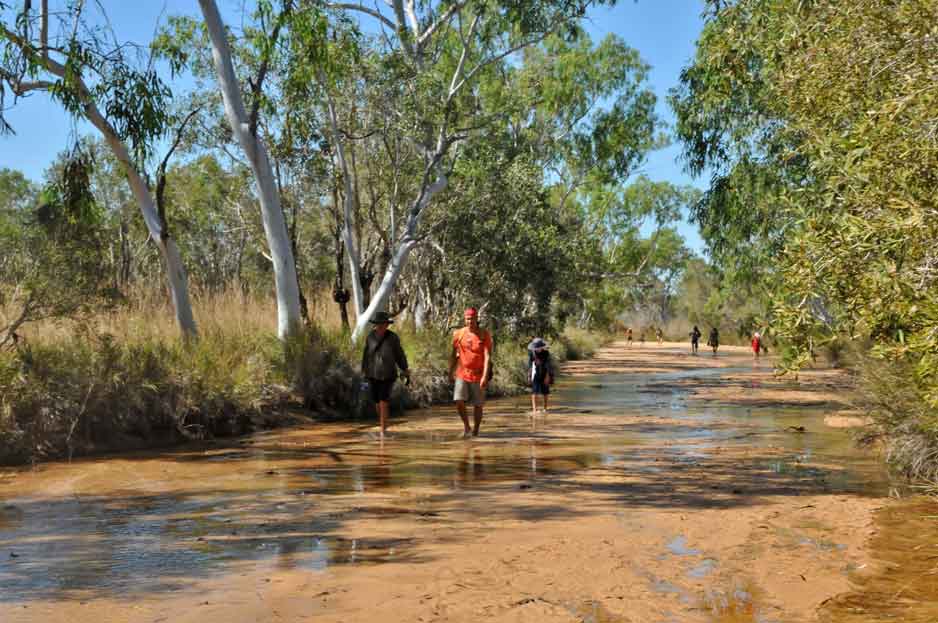 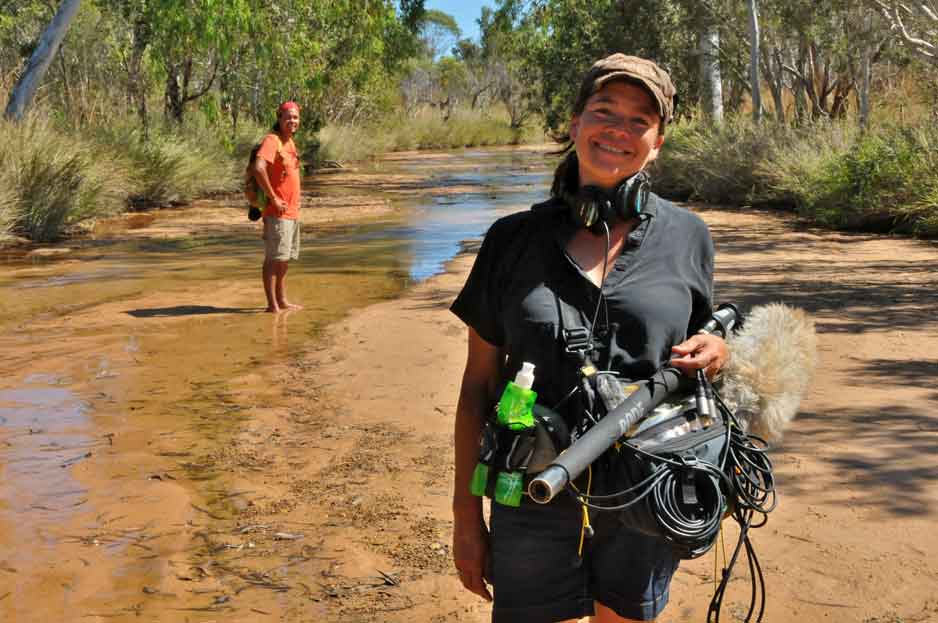 Yellow River and the end of the Lurujarri Trail. 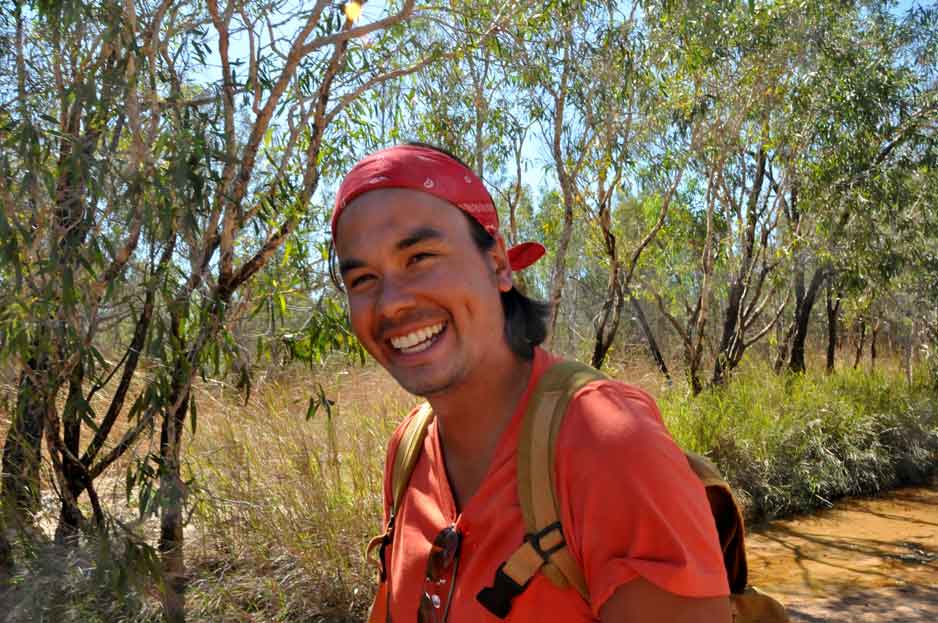 I’ve now seen what the Goolarabooloo are fighting to protect and I’m beginning to understand why their song line is so vital to their identity and cultural survival. But one questions persists – why did most of there neighboring tribes choose to accept the financial compensation package that Woodside had originally offered? It’s a complex issue for indigenous communities throughout the Kimberly, one that ultimately must balance their connection to ‘country’ and the weight of health and social issues that plague their families.

To see my people, aboriginal people, walking around like they’ve got no place… It’s very sad to see them like that. Us, we are connected to the country.I guess when they come out to the bush they feel lost. That’s why culture is important, (it) gives you a sense of belonging, of who you are, and what you believe in. – Terry Hunter Jr., Trail Guide, Goolarabooloo Traditional Owner

Kimberly Regional Economic Development an indigenous organization based in Broome that negotiated with Woodside on behalf of Indigenous communities in the Kimberly. While the Goolarabooloo did not support their efforts, I want to meet their leaders to see why they were willing to accept financial compensation for the use of their lands even though song lines would be broken.

Simon meets the leaders of Indigenous communities to see why they were willing to accept financial compensation for the use of their lands.

In Australia, you don’t have the right to say ‘no’ to these developments, but we still act on the basis that we can say ‘no‘. We don’t wake up in the morning saying ‘let’s build a big mine right here on the river.’ None of us do that. If we had a choice, we’d say ‘no’ to all of this stuff. Wayne Bergmann, CEO, Kimberly Regional Economic Development

Three weeks ago, it was hard to wrap my head around the concept of a ‘song line’ – it’s not something you experience in a book; but by walking this country, the Goolarabooloo have shown me that it’s a living breathing cycle in a timeless, symbiotic relationship with mother earth. As the days on-trail have blended into each other and we’ve moved deeper into the past, it’s hard to imagine how a massive industrial complex could ever fit here. For the 80 people who walked the trail with me this week, we leave as friends, enlightened and somehow changed by the profound experience the Goolarabooloo have shared with us.

As human beings, our future will only sustain itself through alternative means. What are those alternatives? I don’t know exactly, but I think it’s up to us as individuals to write and create that history.– Albert Wiggan, Bardi Traditional Owner

On our last night on the Lurujarri Trail, Law Boss Philip Roe gathered us all around the campfire and shared with us the songs that have been passed down from generation to generation for tens of thousands of years. These are the songs that are encoded into their song line and we are all honored that the Goolarabooloo have allowed us to share their story.

Philip Roe shares the songs that have been passed down from generation to generation.

On behalf of Native Planet, our profound thanks go out to the Goolarabooloo people for their kindness, wisdom and generosity. Sadly, shortly after we returned to Canada, Oliver Mock, one of the hikers I befriended and walked the Lurujarri Trail with, was tragically killed in a climbing accident. This episode of Native Planet is dedicated in memory of him and our dear friend Deb Vincent. 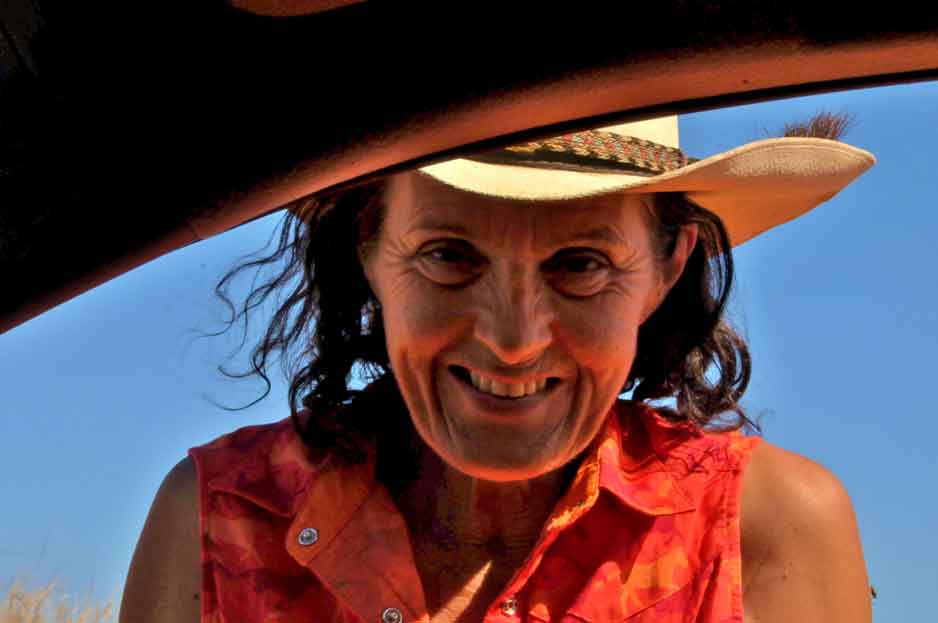 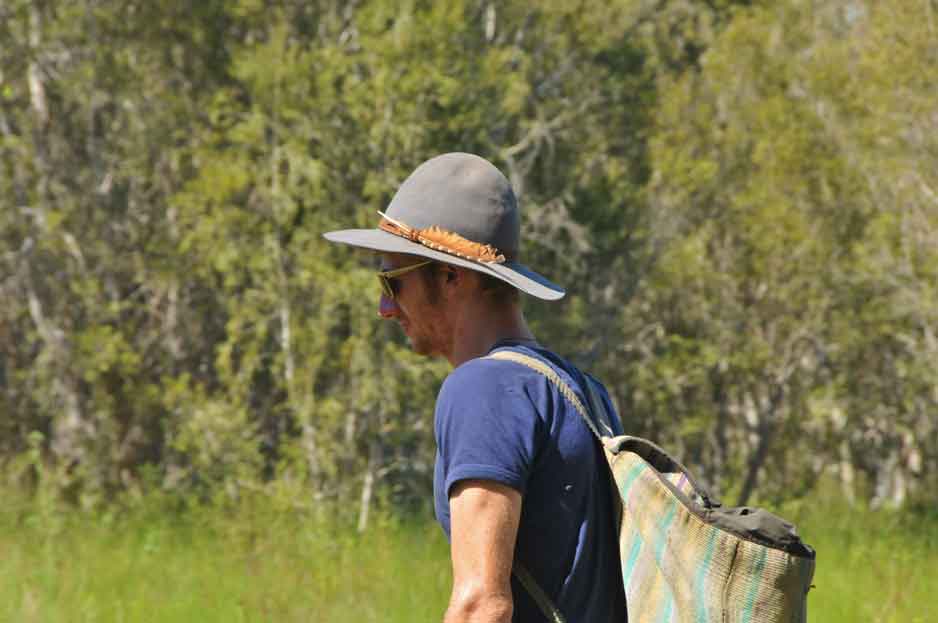 NEXT: Journey with me to Rapa Nui (Easter Island)